Join an immersive IMAX® adventure to experience the life-saving superpowers and extraordinary bravery of some of the world’s most amazing dogs. In this inspiring true story, our best friends are also real-life superheroes. Journey around the globe to meet remarkable dogs who save lives and discover the powerful bond they share with their human partners. Follow Halo, a rookie puppy training to join one of the most elite disaster response teams in America. Meet Henry, an avalanche rescue expert in the mountains of British Columbia, Reef, a Newfoundland lifeguard with the Italian coastguard, Ricochet, a Californian surf legend helping people with special needs, and the Bloodhound brothers, Tipper & Tony, who are leading the fight to save endangered species in Africa. As we discover the incredible abilities of dogs and the astonishing science behind their superpowers, we’ll never look at our best friends the same way again! 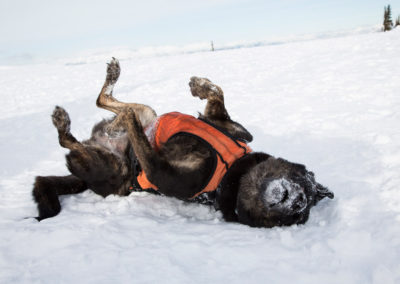 The Team Behind The Film

Cosmic Picture was founded in 2004 to produce and distribute the most compelling cinematic experiences possible to change people’s perception of the universe in ways never imagined. The company has produced multiple award-winning documentary and feature films, including Afghan Stories, which was described by the Anthology of Cult Films as one of the best documentary films ever made, Last of the Elephant Men, winner of four Gemini (Canadian Emmy) Awards, and The End of The Line, which has been called “An Inconvenient Truth for the Oceans” by The Economist and which won the Puma Creative Impact prize for the film which has had the most global social impact.

Cosmic Picture specializes in IMAX and giant screen films, most notably Journey to Mecca and Jerusalem, winner of the 2014 Giant Screen Film Awards for Best Film and Best Cinematography.  Project principals have also been involved in Lost Worlds: Life in the Balance, Wired to Win: Surviving the Tour de France and Shackelton’s Antarctic Adventure. The team is currently completing work on Superpower Dogs, which has been ranked the #1 most anticipated new giant screen film by museum and science center film buyers for three years in a row.

In 2018 Cosmic launched a distribution arm and inked a deal to sub-distribute National Geographic’s giant screen films, giving them a library of well over 20 titles, including Sea Monsters and James Cameron’s Deep Sea Challenge. His most recent film is the feature documentary, Last of the Elephant Men. He sits on the board of the Giant Screen Cinema Association and the Alter-Ciné Foundation, which provides grants to filmmakers in the developing world. Taran studied filmmaking at Harvard (’93) and worked in finance and venture capital for several years in New York City. George produced feature films such as Milk and Dot the I starring Gael Garcia Bernal, which premiered at Sundance and won the Deauville Audience Award.

He produced the feature documentary The End of The Line which has been called “An Inconvenient Truth for the Oceans” by The Economist and which won the Puma Creative Impact prize for the film which has had the most global social impact.

He is the Co-Founder of the BLUE Marine Foundation, which is dedicated to creating effective Marine Reserves around the world. Dominic co-founded Cosmic Picture in 2004 and produced the award winning IMAX® documentary film Journey to Mecca, and conceived Superpower Dogs in 2014. Dominic has shot and produced documentary films for National Geographic, Discovery Channel, Paramount Pictures, and News Corporation, and hosted the acclaimed National Geographic specials Diamonds of War and The War Next Door.

He worked as freelance journalist for Associated Press and Reuters covering conflicts in Africa and Afghanistan. Danny Wilcox Frazier is a documentary photographer and filmmaker. His photographs appear in multiple public and private collections, including the Philadelphia Museum of Art, the Museum of Fine Arts, Houston and Smithsonian’s National Museum of American History.

He lives in Iowa with his family and their multiple pets including a Bracco Italiano named Nelly and Shar-Pei named Oscar.​

FILMING AROUND THE WORLD